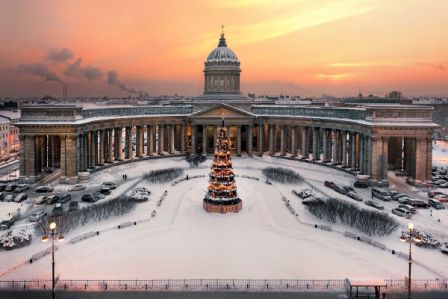 Kazanskiy cathedral is one of the main city cathedrals. The cornerstone of the cathedral was laid on August 27, 1801 on the place of the little church of the Birth of Our Lady, where the miracle-working icon of Our Lady of Kazan was entreasured. The cathedral had been constructed only by 1811. After the victory over Napoleon, Kazanskiy Cathedral became the memorial of the Patriotic war of 1812. The banners of the French regiments, the keys of the cities and fortresses occupied by Russian troops and other trophies were brought here. In 1813 commander Kutuzov was buried on the territory of the cathedral. After the revolution the Museum of Religion and Atheism was opened in the Cathedral. Since 1990 the divine service began to be ministered again in Kazanskiy cathedral.